Natalie is a finalist in a design contest for Fluevog shoes, vote for her daily here:
http://www.fluevog.com/code/fc_finalists.php

Every vote counts, thanks.

Tonight we have ohGr and American Memory Project at the 'dise. Also, grainy photos of same.

Deja-vu. Almost exactly a year after the last trip to the Roxy to get Religion, we're back with the Reverend and Nashville Pussy. Aside from me losing my toenail last year, I think I had just as much fun.

Let's get one thing straight from the outset. I refuse to keep pasting "Mediæval Bæbes" because I'm too stupid to learn how to make a swell "æ". I am changing to Mediaeval Baebes forthwith.

I'm way behind on uploading photos for shows, like everything since Vega$ pretty much, and even then I've only put up like half of those. In any case I wanted to get these out for several reasons:

A:) There's a fuckton of them. I took 91 pictures that were good enough for Flickr. If I didn't do it now, I wouldn't ever bother.
B:) There were a handful of my friends there who weren't able to bring cameras and I was psyched that someone else might actually want to see these.
C:) Trent. Fucking. Reznor.
D:) I'm not going to sleep any time soon.

With literally 96% of my office at an outing, it's a very, very quiet day. I decided to follow

mrpet's instructions:
Take a picture of yourself right now.
don't change your clothes, don't fix your hair...just take a picture.
post that picture with NO editing.
post these instructions with your picture. 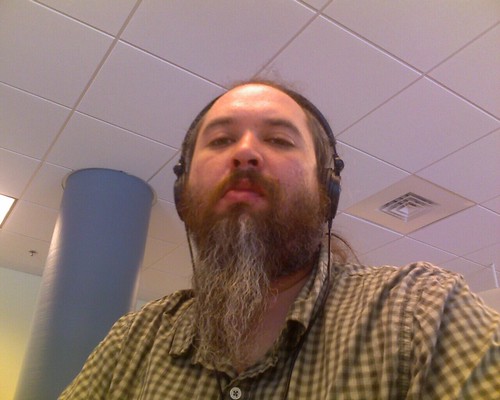 Rasputina is always a good show, though I'm still waiting for one of their shows to match my first show with Zoe Keating and Jonathan TeBeest at Pearl St. There were some surprises tonight too, and I make some demands.

Natalie and I were very happy to see these guys touring this year. Squirrel Nut Zippers is fun, the Dise is a fun place to see bands (as long as I can stake out my pole early), so it was a no brainer. We got lucky, for this show was greatness.

Fun fun fun. This show was apparently the first ever at LeLacheur Park in Lowell, I hope they do more after this, it was great. The floor they put down was way easier on an old man's knees than concrete or even wood. After jumping around for 3 hours I can still pretty much walk, which is a bonus.